The City Between Series​
by W.R. Gingell
From Book 1: When you get up in the morning, the last thing you expect to see is a murdered guy hanging outside your window. Things like that tend to draw the attention of the local police, and when you’re squatting in your parents’ old house until you can afford to buy it, another thing you can’t afford is the attention of the cops.

Oh yeah. Hi. My name is Pet. It’s not my real name, but it’s the only one you’re getting. Things like names are important these days.

​And it’s not so much that I’m Pet. I am a pet. A human pet: I belong to the two Behindkind fae and the pouty vampire who just moved into my house. It’s not weird, I promise—well, it is weird, yeah. But it’s not weird weird, you know?

Reads I Return To 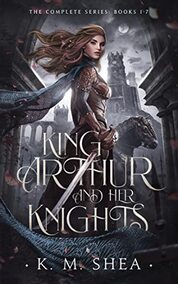 King Arthur and Her Knights
by K. M. Shea
Long live the King?
When Britt, a modern young woman, is pulled by a magical summons back through time she finds herself smack in the middle of the schemes of the surprisingly young and handsome wizard Merlin. Britt has no interest in the throne, and she definitely doesn't want to pretend she is the legendary King Arthur, but Merlin has some bad news.
The real Arthur has run off, and the legendary sword in the stone has chosen Britt to take his place.

But Britt quickly learns that life in ancient Britain isn't safe. The kingdom is fragmented with enemies on all sides, and there’s little chance for mercy if her real gender is exposed. Britt finds herself fighting for her life again and again on behalf of her people and the knights who serve her--and Merlin only adds to the chaos of her new life.

Focused on his goal to unite Britain, Merlin is oblivious of Britt’s growing feelings for him. Or so she thinks. But what future can they have in a world that only sees them as monarch and confidant?
​
Don’t miss this complete collection of the finished King Arthur and Her Knights series. The series is based on Arthurian legends and lore and is sprinkled with humor, love, and more than a dash of magic. If you enjoy strong characters and tales about the Knights of the Round Table, check out the King Arthur series today!